The Trip That Changed Me

It’s been a month. And I am changed forever.
On November 14th, 2015 I embarked upon a mission like no other. I traveled to the country of Jordan for a medical mission with the organization I work for, the Syrian American Medical Society. My position in SAMS is to coordinate the medical missions from the US side, and to communicate with our Jordan office to set up the logistics. I’ve done this countless times over the past year and half that I’ve worked, but I wanted to gain real insight into our missions to better help the volunteers. And so I went.

A side street in Zaatari. Photo taken by me.

I’ve spent time in refugee camps before. Growing up Palestinian, we used to travel to Palestine every summer to visit our family and reconnect with our homeland. I have seen the devastation that is a refugee camp; the run-down homes, the sense of resignation, the hopefulness of the people. Yet nothing could have prepared me for the Zaatari refugee camp in Jordan.
I am the type of person who likes to stand strong in times of crisis. I am the one holding everyone together. I rarely cry in public, and sometimes even find myself holding back tears in private so as not to fall weak to my emotions. I know it’s not healthy, and one needs to express emotions, but this is why I write. So when I entered the refugee camp, I felt strong. I reminded myself that I was there to do a job, and that I needed to focus on my duties as a SAMS employee.
However, that went out the door as soon as we saw the first patient: an 18 year old girl who had a 6 month old child and was afraid she was pregnant again.
Those of you who know me well, know that I am a huge advocate for women all around the world. My goal is to run a nonprofit someday that focuses on empowering women through education and microfinance. So to see such a young girl already married with a child…well, it tore me apart. But it didn’t stop there. I saw women my age on their 7th or 8th child; women who were younger than me who looked 20 years older. I saw women who had hope in their eyes for a future outside the walls of the camp, but who knew realistically that may never happen. 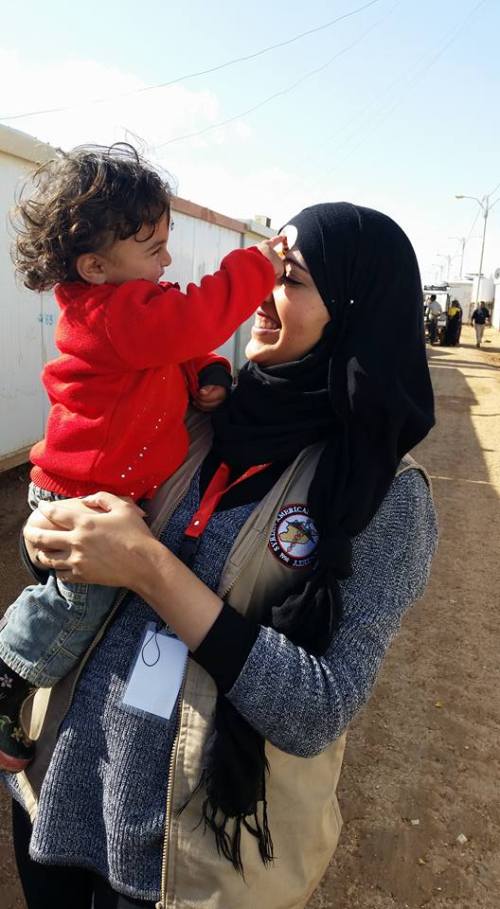 Me and Aseel; one of the most lovable children I met there.

The first night back at the hotel, I cried; in my room, the shades drawn, the lights off. I felt helpless and hopeless. I felt guilty that I lived a good life in the US, and these women had done nothing wrong yet they lived a life of misery. But I knew feeling sorry for them would do nothing to help.
For the rest of my time at Zaatari, I worked on talking to these women as if they were my friends. Many would notice my Arabic and come speak to me candidly about their lives. Some held out their children for me to hold and take pictures with. Many thanked me for just listening to them, and even more sent me home with an abundance of blessings for being there and helping out. I felt so unworthy of all of that praise.
My experience did not end there. The other group that pulled on my heart was the children. Specifically, the girls. In any type of situation where there is war and poverty, the girls suffer the most. When there is a lack of funds, a girl’s education is the first to be sacrificed. Because she cannot be educated, she is then married off young. The reason behind this is to preserve her safety and honor, as unmarried girls are susceptible to kidnapping and rape.
So many of the young girls that I met were bright, energetic, and driven. They had hopes for a future filled with school and careers. Many of them were continuing to learn on their own as the education cuts off for them around high school. Over the course of the week, I began to learn many of them by name. These girls would come up and ask me questions unabashedly- nothing was off limits for them. And I did my best to answer them honestly. Looking into their eyes as they spoke, I wondered what they were thinking. I wondered if they felt their status as a refugee. Many of them were in their early teens- I worried for these girls the most because I knew that unless they had a chance at higher-level education, they would be married off soon. 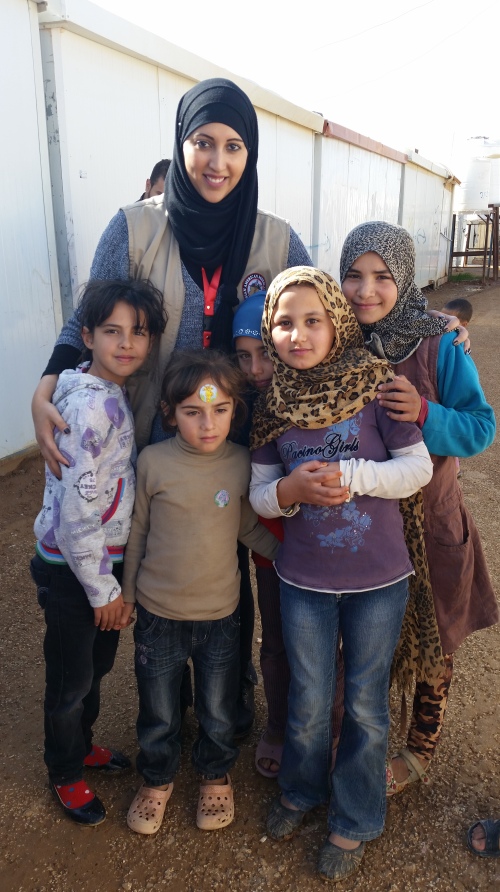 Me and some of the beautiful girls I met.

Leaving Zaatari was like cutting out a piece of my heart. Since I’ve been back, there has been a dull ache in my chest. I am not sure what it is I am feeling, but something took a hold of me during my trip, and it won’t let go. I have the amazing opportunity to lead our next medical mission in Jordan in April 2016, so once again I will travel to Zaatari, and I hope to have some educational services to implement by then.
I know my work is far from done. I know I have so much more to do. I have started this journey and will not stop until I have created a lasting impact on the Syrian refugees in Jordan. I am still at the beginning of my legacy, but mark my words- that legacy will change the world.

4 Comments to “The Trip That Changed Me”